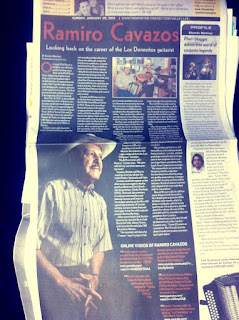 I had the pleasure of writing an article for The Monitor that was published on January 29th, 2012. It's a piece on the legendary bajo sexto player of Los Donneños - Ramiro Cavazos. I met up with Cavazos in January at his music shop in South McAllen and had a good little chat with him about his career. His buddy Juanito was there for the conversation too and added a lot of good information about the career of Mr. Cavazos. Very classy and humble individual, Cavazos is a total class act. Here is my article:

On South 23rd in McAllen, you will find a small charming music shop named RyN Music Store. Upon entering the music shop, you'll see it packed with a varied selection of regional Spanish music and see the walls covered with photographs, posters and even some musical instruments. The first person that is probably going to greet you while entering this business is the legendary Ramiro Cavazos.

Born on February 16, 1927 in Garza Ayala in the state of Nuevo León, he would eventually become a historical figure in regional Spanish music thanks to his success in South Texas. Before Tomas Ortiz and Eugenio Abrego were even named Los Alegres de Terán, he collaborated with them on various platforms in the 1940's and early 1950's in Mexico.

Cavazos eventually found his way over here to the United States, where he met accordionist Mario Montes in Donna, TX. He still fondly recalls the first time he met Mario Montes. Cavazos had moved from Raymondville to Donna in the late 1940's and was riding his bicycle one day when he saw two men playing music. He went up to them and one of the men asked him if he was a musician. Cavazos responded to that man saying he knew how to play the guitar and sing. That man turned out to be Mario Montes thus forming a lifelong friendship and musical partnership.

Cavazos and Montes went on to do their first recordings for the McAllen based Discos Falcon in 1947. These early recordings featured Cavazos on the guitar as opposed to him using the bajo sexto, which he would be more famous for doing in later years. The two men will forever be associated with the name Los Donneños and Cavazos credits the name to one person. After completing their initial recordings, Discos Falcon owner Arnaldo Ramirez decided to give Cavazos and Montes the name Los Donneños based on the fact that they were now residing in Donna. Both Cavazos and Montes were perplexed, they thought to themselves why would we be called this considering we're from Mexico and had just recently moved to Donna. But the name stuck and he's now proud of the legacy that he has created with Mario Montes under the name Los Donneños.

After those early recordings, he decided to change from guitar to bajo sexto. "The guitar didn't sound too good," reflects Cavazos in Spanish. "The bajo sexto is a lot more stronger than the guitar."

Later in the 1950's, Cavazos and Montes would go on to work in the Mexican film industry with major motion picture star Lalo "El Piporro" Gonzalez. "We did five movies with Piporro," Cavazos recalls. "We were with him for over three years playing music." Cavazos, Montes and Piporro would go on to tour all over the United States, Venezuela and Cuba.

Cavazos would also appear on the silver screen once again in the the great Les Blank and Chris Strachwitz documentary "Chulas Fronteras" (1976). This iconic documentary on conjunto and norteño music features Cavazos and Conjunto Tamaulipas opening up the film with a great interpretation of Canción mixteca. Cavazos is later featured once again in the film with conjunto pioneer Narciso Martinez.

Other record labels that Ramiro Cavazos has recorded for include Discos Del Valle, Discos Torero, and Columbia Recods (aka CBS Records) in Mexico. "We recorded with them for 17 years," recalls Cavazos on his major deal with Columbia Records. Then in 1972 he would start his own record label called Discos RyN, which included a partner in Monterrey, NL. He would record many artists under the Discos RyN brand like Ernesto Guerra, Narciso Martinez, Conjunto Tamaulipas, Beto Quintanilla, Los Fantasmas and Ruben Vela.

After the passing of Mario Montes in the early 1990's, Cavazos has gone on to play with Rene Maciel, Juan Antonio Coronado and Beto Espinoza in various incarnations of Los Donneños. In 2007, at the age of 80, he was inducted into San Benito's Texas Conjunto Music Hall of Fame for his achievements as a musician.

"We are blessed that he is still here with us and continues to play the best ballads, corridos, and just great bajo sexto playing no longer seen in new conjunto musicians," says Lupe Saenz, president of the South Texas Conjunto Association. "His compositions are constantly being recorded by conjuntos because they know that his songs are quality compositions. Composers like Mr. Cavazos are few and far between. Ramiro Cavazos is an icon and a legend in his own style that only he can produce."

Now at 84 years old, he still has many things to look forward to. He is looking forward to his 85th birthday next month that he plans to celebrate with his family and friends. He is also very excited about the release of a new CD he recorded with his accordion playing grandson Alan Cavazos. "In about two weeks the CD will be released out to the market," Cavazos eagerly informs me.

"I have sixty five years as a musician," Cavazos enthusiastically says. He jokingly concludes, "My [friend] Juanito doesn't want me to play anymore but I can't retire."

I thought I would share some videos that would add to what Cavazos has done in his long storied career.

Ramiro Cavazos told me that he has come out in five films with Piporro. This is one of those films that features a great musical number with Piporro and Los Donneños. The name of the film is "Dos corazones y un cielo" (1959):

Ramiro Cavazos and Conjunto Tamaulipas performing Canción mixteca in "Chulas Fronteras" (1976). This documentary on conjunto and norteño music was selected to be in the United States National Film Registry. On the commentary track, Chris Strachwitz credits Ramiro Cavazos with being the person that helped Strachwitz get a hold of a lot of the musicians featured in this film.

I want to wish an early happy birthday to Ramiro Cavazos, he will be turning 85 years old on February 16th, 2012. I hope he has a great time with his close family and friends.
Written by Eduardo at 3:49 PM

Add comment
Load more...
Newer Post Older Post Home
Subscribe to: Post Comments (Atom)
"You know your stuff, vato." - Roberto Pulido from Roberto Pulido y Los Clasicos, as we talked about our love of Los Donneños.
"I'm a fan of your work Eduardo!" - Cristina Balli, executive director of the Guadalupe Cultural Arts Center, after I ran into her at the Narciso Martinez Cultural Arts Center Conjunto Festival in 2014.
"It is is really beautiful and you do amazing work." - John Darnielle of the Mountain Goats talking about what I share on my blog, after our interview in 2015.
"Thank you for the amazing work you're doing! I'm a huge fan of yours and Neta RGV." - Pamela Colloff, ProPublica senior reporter and New York Times Magazine writer.
Donations to help support my work appreciated. So much of the creative work I've done has been for no compensation. PayPal if you would like to support what I do at eduardo@netargv.com.